Humans Hardwired to Feel Others' Pain

Empathy is the ability to understand another person's feelings. "With familiarity, other people become part of ourselves," study author James Coan, a professor at the University of Virginia, said in news release.

He and his colleagues used functional MRI to monitor the brain activity of 22 young adults while they, a friend or a stranger were under the threat of receiving a mild electrical shock. They saw that the same brain regions were activated when the participants were threatened with a shock or when a friend was under threat. 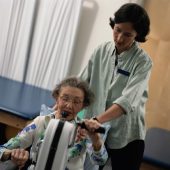