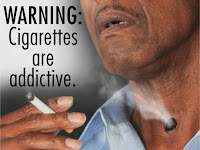 Health and Human Services Secretary, Kathleen Sebelius speaks about the change in cigarette packaging. Introducing grahpic images of adverse health consequences is the latest in a long line of efforts to reduce smoking:
http://www.google.com/search?source=ig&hl=en&rlz=1G1GGLQ_ENUS321&q=new+cigarette+packaging&aq=0l&aqi=g-l8g-lv2&aql=&oq=new+cigarrette+pack#q=new+cigarette+packaging&hl=en&rlz=1G1GGLQ_ENUS321&prmd=ivnsu&source=univ&tbm=nws&tbo=u&sa=X&ei=UkEDToT_OYa6tgeXqrWVDg&ved=0CD8QqAI&bav=on.2,or.r_gc.r_pw.&fp=d1486196702e9ec0&biw=1003&bih=493

Will this lead to change? You can weigh in with your opinion at:
http://www.bnet.com/blog/health-fit-tips/will-new-graphic-images-deter-smokers/1021
Posted by Psychological Health Roanoke at 6:50 AM No comments:

The Biathlon is best known as a winter sport event that combines skiing and shooting- but you will not need your boots and gloves for the event. This is its warm weather counterpart, and is part of the Coventry Commonwealth Games, which will be held Saturday, July 23rd in Roanoke, Virginia.

Competitors begin with a 1 mile run that brings them to the shooting range. They lay down, pick up the rifle, shoot five shots at metal knock down targets, jump up, walk to the end of the range, and continue the running. One mile later they are back at the range, and shoot five shots from the standing position. The race ends with a 1 mile dash to the finish. Interval starts are used, with 1, 2 or 3 runners starting together every minute. The rifles are .22 caliber. Rifles and ammunition will be provided.

The Coventry Commonwealth Games is the nationally recognized State Games of Virginia, a sports festival with over 50 events that began in 1990.

There will be a team competition in Biathlon with a Police Team Trophy that is being sponsored by Psychological Health Roanoke.

This is a unique opportunity for Departments to test their skills against one another and, for the officers to test themselves under pressure of competition.

For more information about the Games check out its web site

http://www.commonwealthgames.org/.
Posted by Psychological Health Roanoke at 8:03 AM No comments:

I have been so fortunate to receive the opportunity of working as an intern at Psychological Health Roanoke. I have really learned so much about the workings of a private psychological clinic, and received great hands on experience. Everyone has been so welcoming and helpful in my experiences throughout the past semester. The clinicians are all so talented at their specific fields and I was privileged enough to sit in on multiple sessions with some of them. This was the most informative experience I have had thus far in my college career, and I cannot express my gratitude for receiving the opportunity to really explore the field of clinical psychology with such kind and talented clinicians. This experience has really solidified my future aspirations to become a clinical psychologist and I have been so lucky to be able to learn so much about therapy and the insurance aspects of a private practice. I will bring the skills I have attained from this internship with me into my future towards becoming a licensed clinical psychologist.

Courtney Kellerman
Posted by Psychological Health Roanoke at 10:15 AM No comments:

The Role of Art
Billy Bob Beamer is an internationally known artist who creates his art through use of meditation. He also teaches classes in “drawing as quiet active meditation” to relieve pain and stress. Beamer, a sociology graduate of the College of William and Mary, is also a retiree from the Commonwealth of Virginia’s Department of Social Services, and an award-winning trumpeter, with a 40-year week-end career playing jazz, R & B, blues, and other types of music.

The Role Of Exercise
Stephanie Simmons Gillenwater is a Personal Trainer and Group Exercise Instructor at the YMCA in Salem, VA who is also diagnosed with fibro-myalgia. Stephanie will share her experience with exercise as a way to manage her chronic pain. Stephanie is hoping to eventually begin a group exercise program at the YMCA specifically for people with chronic pain.
Posted by Psychological Health Roanoke at 9:46 AM 1 comment: 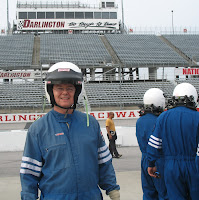 Being a life-long fan of stock car racing came about easily for me—my dad raced at regional short tracks for several years in the early 50s and although he quit before I was born, he continued to attend as a fan, and when I was about four years old, he took me to my first race. The sound, the sights, and even the smell all grabbed me and has continued to this day. I still attend races during the season and have seen a lot of NASCAR’s greats compete.

There are probably few people who are fans of auto racing who haven’t fantasized about trying it, and I’m no exception. I did race in an entry level race locally one time years ago, which was a thrill. However, my fantasy of driving a NASCAR Sprint Cup car remained. As stock car racing began developing a bigger audience through TV in the 80s and90s, entrepreneurs saw this as an opportunity to satisfy some fans’ yearnings. One such group, the Buck Baker Driving School, founded by a Retired former Sprint Cup driver, was founded and started running driving schools at various NASCAR race tracks throughout the southeast. After years of toying with whether or not to spring for the money to do this, I finally decided to scratch this item off my “bucket list”, and go for it.

I close Darlington (S.C.) Raceway as the site where I’d do the school. Darlington, known as
one of NASCARs toughest tracks, is also host to its oldest event, the Southern 500. Sentimentally, I picked it because my dad was a pit crewman for a local driver in the ’54 Southern 500.

Driving into the infield of the track was a thrill—I was on hollowed ground as far as stock car racing was concerned. My fellow students heard a lecture by one of the driving instructors regarding safety— they didn’t want their expensive race cars torn-up by Richard Petty wanna-bes –-and I didn’t want to be one who was tearing them up, so I listened carefully. We were then fitted for firesuits and helmets, and then all awaited nervously (yep, I was nervous) for our turn as a passenger in one of the school’s fleet of cars.

I thought (erroneously, as it turns out) that my few laps as a passenger would be laid-back, at least building up to higher speeds---WRONG! On the very first lap, I could feel centrifugal force pushing my down into and against my seat, and we weren’t going anywhere near as fast as the pros do it during competition.

Next, I got to drive, with my instructor assuming the passenger role. I was DEFINITELY nervous at this point, particularly since what I was going to be doing was going to be scrutinized. As I drove through Darlington’s tight backed turns, I could see the tell-tale tire marks left on the wall when drivers at the last race had got into incidents that left them coming into high speed contact with those walls. This was anattention-getter, and a reminder that there was a fine line here between having fun and very undesirable consequences.

After my laps with my instructor, he told me that I’d done well, with his advising me to take a different line going into turns 1 and 2, and to slow down going into turn 3. This was flattering in a way, as I didn’t want to be “pokey” in my driving endeavor.

Then it was “solo” time. By this point my nervousness had decreased a bit and instead I was filled more with excited anticipation. I then did a 10 lap session, then a 15 lap session. Though I was still mindful that I was not Dale Earnhardt, I was feeling a little more confident. There were other students on the track, some 3-4 at a time, and my ego did not want me to be passed by anyone. I was happy that I was able to pass several cars during my sessions, and was not passed by anyone (take that, Jeff Gordon!) and was signaled by the flagman a couple of times to slow down. Not that I was driving like a maniac; the school later said that they take a close line on how much latitude they allow its students to push the boundaries. Well, I’m glad I pushed ‘em some! Although our lap speeds were probably some 40 mph slower than the race speeds
of some 170 registered by NASCAR Cup drivers during competition, it gave me a greater appreciation for what those guys do for a living, for hundreds of laps at a time, along with a field full of other competitors wanting to beat them.

All too soon, it was over. I was given a couple of “atta-boys” by instructors and fellow students, and then it was time to turn in my driving suit and helmet. All of us even picked up a “diploma” showing we’d successfully completed the course. I felt more than a twinge of sadness as I turned in my equipment—there was a group of new students coming in for the afternoon session, looking as nervous as we did that morning, and I felt some mild jealousy that they were getting to drive, and I was headed for home.

People have asked me: was it fun? Undeniably, yes! Did I “get it out of my system”? No (“it’s” probably worse now!) Will I do it again? Heck, yes!
Posted by Psychological Health Roanoke at 7:51 AM No comments: